What Remains: Coming to Terms with Civil War in 19th Century China

This talk will explore the issues that preoccupied Chinese and Western survivors of the Taiping Rebellion, a bloody conflict that ravaged China from 1850 to 1864 and that cost the lives of millions. Based on pioneering research into the emotional and often moving accounts left by contemporaries, this talk will allow a glimpse into how men and women in 19th century China struggled to rebuild cities, bury the dead, and make sense of this catastrophic event of mass violence.

Light refreshments will be served. 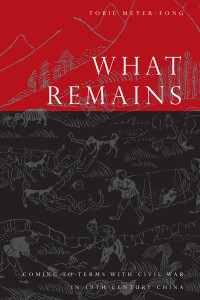