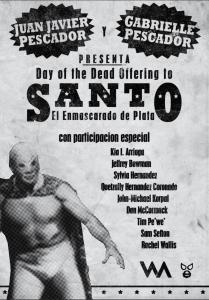 El Santo is coming to Detroit …

Santo El Enmascarado de Plata (Rodolfo Guzmán Huerta, 1917-1984), a professional wrestler-movie star known as El Santo, starred in several movies in the lucha libre genre between 1958 and 1984, becoming an iconic figure for generations in Mexico, Latin America and the United States. His performances mirrored the aspirations of the less-privileged classes in which they could see themselves as protagonists in a struggle to survive the contradictions and inequities in contemporary society. This Day of the Dead collective art exhibition explores Santo’s battles against vampires, monsters, zombies, aliens, mad scientists and witches, emphasizing the unique nature of the lucha libre film genre to stage and represent popular values and attitudes.

Please join us for an opening reception for the artists on Saturday, November 1st, 2014

Juan Javier Pescador and Gabrielle Pescador created the ofrenda to El Santo. Their ofrendas have been featured at the Detroit Institute of Arts, the National Museum of Mexican Art, Michigan State University Museum, the Swing Space Gallery and other venues.

This event is free and open to the public. All ages welcome. Open gallery hours are Saturdays during exhibitions, noon-3pm, or by appointment. For more information, e-mail Gualberto Orozco at gualberto@whitdelarts.com. For a full schedule of exhibitions and events at Whitdel Arts, please visit www.whitdelarts.com.