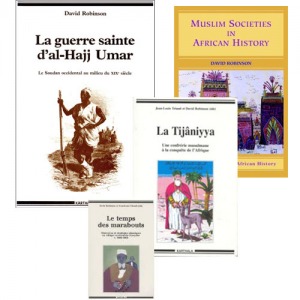 David Robinson and the Writing of African History

David Robinson is a pioneer in the writing of the history of Muslim communities in Africa. In the 1960s and 1970s, when African history was emerging as a new area of study, historians of Africa were mainly concerned with reconstructing the history of the pre-colonial states and telling the story of the Atlantic Slave trade. They left the study of religion to the social scientists. Going against the grain, Robinson made an important contribution by both focusing on the history of the Muslim communities that form the majority of the population of Western Sudan and demonstrating the critical importance of local written and oral sources for a credible reconstruction of the African past. Because of his original and masterful scholarship, Robinson is celebrated as one of the most influential historians of West Africa. His remarkable contribution to the field of African history is also recognized through the diverse group of graduate students he has trained, many of whom have emerged as leading scholars in their respective fields.

Robinson’s students have come together to organize a conference to honor their mentor and pay tribute to his influential scholarship. This event will bring together his former students, colleagues, and friends on the campus of Michigan State University. The conference will be devoted to examining key dimensions of Robinson’s seminal contributions to African studies and historical methodology.

The MSU History department is hosting this conference in honor of Dr. David Robinson’s work in the field of African History. The conference will convene at Michigan State University on April 30-May 1, 2010. Please visit the following website for conference program at: http://drconference.wordpress.com. Please direct inquiries to: history.courses@matrix.msu.edu.