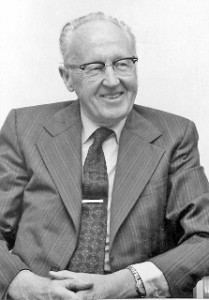 A quintessential midwesterner, Madison A. Kuhn was born in Madison, SD in 1910. His father was a Presbyterian minister and his mother a Sunday school teacher who moved frequently in his childhood.   He briefly attended the University of Dubuque before graduating from Park College in Missouri in 1931.  (Distinguished Alumnus, 1976)

Madison spent 1932 teaching in a missionary community near an Apache reservation in Dulce, NM before moving to Chicago where he entered the graduate program in history at the University of Chicago.  There he studied nineteenth century American history under the eminent Avery Craven. He successfully defended his dissertation, “Economic Issues and the Rise of the Republican Party in the Northwest,” in 1940.

While still in graduate school, Madison looked for work, but teaching jobs during the Great Depression were no more plentiful in 1937 than they had been six years earlier.  After scouring obituaries and other arcane sources for openings, Madison found an opportunity at Michigan State College.  He accepted an appointment, ABD, as an instructor in European history in the History and Political Science Department for the munificent sum of $158.33 per month.  His new wife and lifetime companion, Ruth Tombaugh Kuhn, RN, accompanied him to East Lansing.  With his degree completed, the Department promoted him in 1942, along with his longtime colleague Harold Fields, to the rank of assistant professor, with a salary increase of $8.33 per month.

John A. Hannah became President of MSC on Christmas Eve, 1940.  He and Madison became colleagues, though not always of the same opinion, for the next twenty-eight years until Hannah retired to join the Nixon Administration as head of the Agency for International Development.   Hannah always had great respect for Madison’s academic skills and appointed him College Historian in 1943.  On publication of Michigan State: The First Hundred Years, 1855-1955 (1955), the Board of Trustees formalized his position, now as University Historian.

The 1940’s and 1950’s were years of great growth and change at Michigan State.  What had been predominantly an agricultural college, Michigan State became a university in 1955 and its diversity of offerings reflected many changes.   Acceptance into the Big Ten and Hannah’s uncanny capacity for wresting money from the state legislature had propelled “MooU” into the “big time”.

The Department of History changed as well, evolving from an undergraduate service organization that placed a premium on instructional flexibility to an independent, more professional, specialized entity with a greater emphasis on faculty research and graduate education.  As Madison noted in a 1973 interview published in the alumni magazine “MSU”: “Our History Department had given six Ph.D.’s by 1960, while UM may have given their first six by 1890.”

Madison grew and changed as well in the years after World War II.  He rose through the ranks to become a full professor in 1951.  There were few courses that he did not teach in either East Lansing or at one of the satellite campuses, particularly MSU-O, now Oakland University in Rochester.  Gradually, Madison came to specialize like his colleagues, first in Michigan History and then in a “new” field, Recent American History, 1920 to Date.  When John Garraty left for Columbia University in the late fifties, Madison assumed permanent responsibility for Recent America along with his position as MSU’s institutional memory.  He became one of the anchors of the department.

Taking his role as College Historian with utmost seriousness, and spurred on by Hannah in 1949, he spent a decade interviewing, researching and writing the school’s first serious history.  His book became a standard for institutional history, but sold poorly, largely because he had written it for academics, not alumni.  Nevertheless, the volume was one of four in 1956 to receive an Award of Merit from the American Association of State and Local History.  Approached in 1976, shortly before his retirement, about the possibility of an update, Madison demurred, suggesting that it “should be done by someone else writing from a fresh perspective.”

In the academic triad of teaching, administration and research, Madison’s forte lay with the first two.  His colleague Fred Williams remembered him as enjoying “a campus-wide reputation as a classroom lecturer and director of graduate seminars.  His erudition, good humor and challenging teaching techniques aroused the intellectual curiosity of students and stimulated them to engage in critical thinking.”  Students agreed.  He and Ruth frequently opened their Cowley Avenue home as Madison enjoyed conducting seminars around their dining room table  The senior men’s honorary society, Excalibur, gave him a Distinguished Teaching Award in 1959.  He was also the advisor to Alpha Phi Omega, a coed service organization, from almost his first day on campus.

When graduate education exploded in the 1960’s, Madison answered the call to bring some coherence to a disparate group and teach Historiography, the only required course.  There was no escaping him.  A generation of scholars launched their careers in his classroom.  As one remembered, he was a first-rate scholar, “witty and generous” and “his words of advice still resonate.”

A “reward” for his long tenure was a coveted corner office on the third floor of Morrill Hall.  There Madison kept an open door, though he often joined students and colleagues for spirited political discussions across Grand River Avenue at Kewpie’s.  All day, every day in the Sixties, the history department maintained a revolving table to debate the issues of the day.

Madison’s administrative contributions to MSU make for an exhausting list.  He had two terms, 1960 and 1970, as interim department chairman and he spent over a decade (1967-1977) as Graduate Chairman of the College of Arts and Letters, working first alongside his old friend, Dean Paul Varg and then another, Richard Sullivan.  Madison was vice-president of the campus chapter of the American Association of University Professors (1951-1953) when tenure was a hotly contested issue and a subcommittee of HUAC visited the campus to enforce political orthodoxy.   From 1958 to 1964, he served on the Athletic Council.  Finally, he was the Secretary to the Faculty Senate for most of the turbulent Sixties.

When Clifton Wharton succeeded John Hannah in the fall, 1969, one of the first things that he did was to come to Morrill Hall and make that long, loud walk from the elevator to the corner office.  Wharton, as the first “outsider” to become president, sought the advice and counsel of the man who knew more than anyone what MSU was all about and how it became what it was.  During his brief tenure, President Wharton frequently consulted Madison, knowing that he would receive unbiased insight and advice.

MSU expressed its appreciation for all of Madison’s contributions by naming him a Distinguished Faculty Award recipient in 1968. Two years later he received the Michigan State Honorary Alumni Award.  On his retirement in 1978, his graduate students came from Texas, Colorado, New York and elsewhere in the country to acknowledge their indebtedness to him with a well attended “festschrift” at the Erickson Hall Kiva.

When not teaching or administrating, Madison continued his research and directing a cadre of graduate students, thirteen of whom went on to receive their PhD’s.  If he was not in his office, he could always be found across the circle in the library.  While he did not publish widely, what he did author was the epitome of scholarship and an example to his students.   His unpublished monograph on John Hannah’s tenure is indicative of meticulous research and a masterful command of the language.  When he retired, he donated his papers to the University Archives.  Some of his “papers” were recordings of interviews which he gave the National Voice Library at MSU, an entity which Madison was instrumental in forming.

Upon retirement after over forty years in East Lansing, the quintessential midwesterner, now Professor Emeritus, surprised all, packed up and went to Santa Barbara, CA.   There, he and Ruth joined other expatriates on the West Coast including Robert Brown, Paul Sweet, Kwan-wai So and other MSU friends and colleagues, never missing Michigan winters.  He passed away in 1985.

A memorial service was held in the Alumni Chapel on a bitter cold day in January.  A full house gathered to remember their friend, mentor and colleague.  Even the governor, James Blanchard, the first Spartan Alumnus to hold the office, came to pay his respects to his old teacher.   Madison would have been pleased that so many remembered.