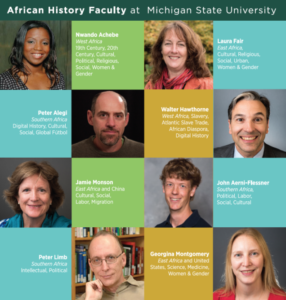 THE RICH HISTORY OF AFRICAN HISTORY AT MSU

This week U.S. News & World Report recognized African History at Michigan State University as the best Ph.D. granting program of its type in the country. MSU’s Department of History is honored to receive this recognition, which results from over a half-century of the university’s commitment to and investment in African History and the African Studies Center. The year 2017 is particularly auspicious for recognition as the nation’s top program, since we are currently celebrating the 50th anniversary of the granting of the first Ph.D. in African history at MSU. The department continues a legacy of assembling world-renowned Africanist faculty members who are dedicated to scholarship, teaching and outreach. The value these Africanists place on excellence, inclusion and connectivity in the form of deep and meaningful collaborations with scholars and communities in Africa is reflected in our top ranking.

African History at MSU became a field of academic focus in the early 1960s. It was then that President John A. Hannah was expanding the university’s international reach, particularly to Africa. In 1960, MSU launched its African Studies Center and partnered with soon-to-be Nigerian President Nnamdi Azikiwe and other Nigerians to establish the University of Nigeria, Nsukka, in Eastern Nigeria. It was a case of the premier land-grand university in the United States helping to create the first land grant university on the African continent. In the 1961, Professor James Hooker, who had completed his Ph.D. research on Tudor England and developed an interest in Africa while serving as an historical analyst for the Department of the Army in Washington, D.C., became MSU’s first Africanist historian. As he did for the Army, at MSU he devoted much of his studies to southern Africa, and particularly to what would become Zambia, Malawi and Zimbabwe. He later broadened his research to the African diaspora and to Pan Africanism. He supervised Ph.D. students focused on both southern Africa and the diaspora. In 1968, the African History field at MSU expanded with the hiring of Professor Harold Marcus. Marcus focused his research on Ethiopia and the Horn of Africa, writing, among other things, biographies of Ethiopian Emperors Menilek II and Haile Selassie and a short history of Ethiopia.

In 1978, Professor David Robinson joined the MSU History Department. During his tenure, Robinson penned 12 books concerning Islam, colonialism, and development in Francophone West Africa. For his scholarship and work with graduate students, Robinson was awarded a University Distinguished Professorship in 1992 and, thereafter, was recognized with one of the very few honorary doctorates by the University of Cheikh Anta Diop in Dakar. Robinson and Marcus, and for a period Professor Elizabeth A. Eldredge, a historian of southern Africa, worked closely with Sociology Professor David Wiley, who directed the MSU African Studies Center. Both Robinson and Wiley provided national leadership in African Studies as vice presidents and presidents of the African Studies Association. Robinson and Marcus also collaborated with Dr. Joseph Lauer and Dr. Peter Limb, who were MSU’s Africana librarians and held Ph.D.s in African History. Lauer completed his Ph.D. research in Cote d’Ivoire and Limb in Zimbabwe and South Africa. Also important was Professor Darlene Clark Hine, a scholar of African American women’s history who for almost fifteen years led MSU’s Comparative Black History Program, which provided a bridge from Africa to its diasporas and added an element to African History at MSU that could not be found elsewhere. Professor Harry Reed, a scholar of both African-American and African history who had completed his Ph.D. under the supervision of James Hooker, was also central to Comparative Black History.

From the 1960s through the 1990s, the university invested deeply in Africa initiatives across campus, raising the profile of African History and African studies broadly. MSU greatly expanded its Africana library collection to the point where today it is among the largest in the U.S. The university also enlarged its teaching of African languages to 29 to increase graduate student preparation for Ph.D. research, and it added faculty strength in African studies in departments across thirteen colleges. African History became one of many gems at a university that was committed to meaningful collaborations with scholarly and local communities across Africa and to ethical scholarship that centered on and advanced the agendas of partners on the continent.

In this period, MSU’s African History program became known for bringing visiting scholars and Ph.D. candidates from across both the U.S. and Africa. History’s cohorts of Ph.D. students were incredibly diverse and graduate seminars lively and engaging. The program’s Ph.D.s migrated to universities around the world. They were, and remain today, instrumental in spreading word about MSU’s reputation for scholarly excellence and socially engaged research internationally.

After Marcus’s death in 2003, MSU President Lou Anna K. Simon joined in efforts to maintain African History as a top-ranked and inclusive program dedicated to engaged scholarly and teaching activities in the state, across the country and throughout Africa. MSU embraced what Simon called a World Grant Ideal, and a strong program in African History important to the pursuit of that ideal. So Robinson and Department Chair Mark Kornbluh along with Professor David T. Bailey and other enthusiastic colleagues in History posted job advertisements and conducted interviews for additional Africanist historians. 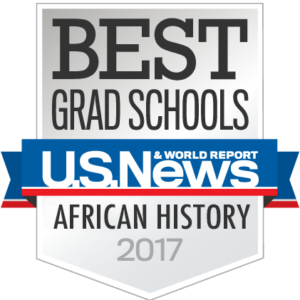 In 2016, Professor Jamie Monson, arrived at MSU to become director of the African Studies Center. She is a historian who examines China-Africa relations and technology transfer with regards to Chinese development assistance to Africa. This team is joined by Professor Georgina Montgomery, whose research on the history of science is rooted in Africa, and Professor John Aerni-Flessner, who writes on the history of Lesotho with an appointment in MSU’s Residential College of Arts and Humanities. Also, with Lauer’s retirement, the MSU Library recently hired Dr. Jessica Achberger, who has a Ph.D. in African history and conducts research in Zambia and southern Africa. She offers, along with Limb (who retires at the end of the 2017 academic year), continuing library support for and scholarly engagement with faculty and students alike. In addition, MSU History has world-renowned scholars of the African American experience, as well as the history of the U.S., Asia, Europe, and Latin America, who study the African diaspora, digital humanities, gender, and migration, among other things, creating terrific synergies within the department. 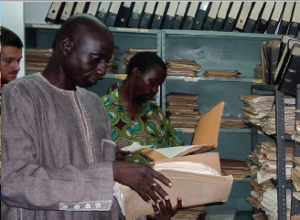 So what accounts for MSU’s number one ranking in African History? First, it is clear that African History’s success results in large part from a broad institutional commitment to the study of Africa. A program does not become number one on its own. It rises with support from administrators, faculty, alumni and friends. It rises in an environment that encourages connectivity with other strong and synergistic programs. Today President Lou Anna K. Simon and Provost June Youatt, along with deans of colleges and the graduate school, and directors of centers and of the MSU Library and MSU Press are committed, like their predecessors, to Africa initiatives. As a result of ongoing investments in Africa programming, MSU continues to tout one of the largest Africana library collections in the U.S., and its MSU Museum, Kresge Art Gallery, and Eli and Edythe Broad Art Museum exhibit distinguished Africa collections. MSU’s commitment to Africa means the campus is home to one of the ten federally-funded Title VI National Resource Centers for African Language and Area Studies. The Center’s 160 world-acclaimed faculty members offer 29 African languages, advanced interdisciplinary studies at the undergraduate level, and world-renowned Ph.D. programs. They also expand this nation’s knowledge and appreciation of African cultures, peoples, and history by conducting outreach to other colleges and universities and to K-12 classrooms. Further, the African Studies Center has launched the Alliance for African Partnerships, which is innovating new models of engagement for shared research, while enhancing the resources and capacities of African universities, institutions and scholars. Many Africanists on campus participate in interdisciplinary dialogues in the African American and African Studies Program. And the MSU Press has become known for its book series on African History and Culture, the editor of which is Peter Alegi, and for the Journal of West African History, the editor-in-chief of which is Nwando Achebe. 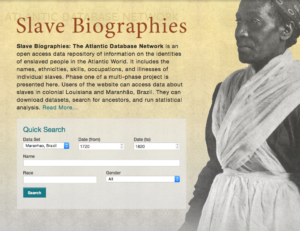 Second, MSU’s program in African History is strong because of a unique digital public outreach element, which is central to maintaining connections with scholars and communities across the U.S. and in Africa. Most of MSU’s Africa-focued digital projects are carried out in partnership with Matrix, MSU’s Center for Digital Humanities and Social Sciences. Under past director Mark Kornbluh and current director Dean Rehberger, Matrix has partnered with MSU’s Africanist historians and other faculty for a broad range of public digital projects that have garnered international attention and considerable grant funding. Among the projects are the podcast series Africa Past and Present, and a host of African digital galleries including Slave Biographies, Islam and Pluralism in West Africa, African Oral Narratives, The African Online Digital Library, The African Activist Archive (8,000+ items), The African Media Database (16,000+ items), and South Africa: Overcoming Apartheid, Building Democracy.

African History at MSU has also benefited from strong connections to H-Net: Humanities & Social Sciences Online, which is an international scholarly society founded in 1993 and housed in the MSU History Department. MSU’s Africanist History faculty was instrumental in the early years of the society and continues to develop the society’s scholarly engagement with Africa. Research and teaching centered on digital African history is further facilitated by LEADR, History’s Lab for Education and Advancement of Digital Research.

Third, MSU is number one in African history because the collection of historians of Africa that MSU has assembled is remarkable. The MSU Department of History has the largest number of Africanist historians in the United States. Together Achebe, Alegi, Fair, Hawthorne and Monson have published a large number of books and articles in prestigious venues, been the recipients of scholarly prizes, been at the cutting edge of digital work focused on Africa, and directed excellent Ph.D.s students who graduate to enter the professorate in the U.S. and abroad. They have increased History’s grant and fellowship funding by receiving significant awards from Fulbright-Hays, the National Endowment for the Humanities, and the World Health Organization, among other organizations. The group has research interests that span much of the continent—West Africa, East Africa, and Southern Africa—and that consider pre-colonial, colonial and post-colonial history. The program also has great depth in cultural, social, and gender history. 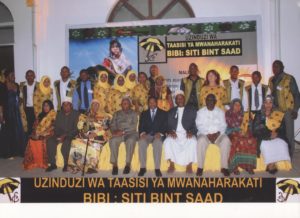 Laura Fair in Zanzibar for launching of one of her books

Finally, Drs. Achebe, Alegi, Fair, Hawthorne and Monson and the entire Department of History have maintained the commitment to the ethical, socially-engaged, Africa-centered scholarship that Robinson and Marcus pioneered at MSU. The African History program is known today for crafting diverse cohorts of students, both international and domestic. It stresses the importance of language training and of investing extended time in the region that is the focus of one’s Ph.D. research. It focuses especially on building personal and academic connections to African universities and communities as the foundation of a lifelong career with African peoples in relationships of equity, transparency, reciprocity, and mutual respect. And it has a firm commitment to scholarship that advances social justice; engages with the public, schools, universities, and teachers; and fosters new understandings of the historical roots of issues that Africa and the world face today.